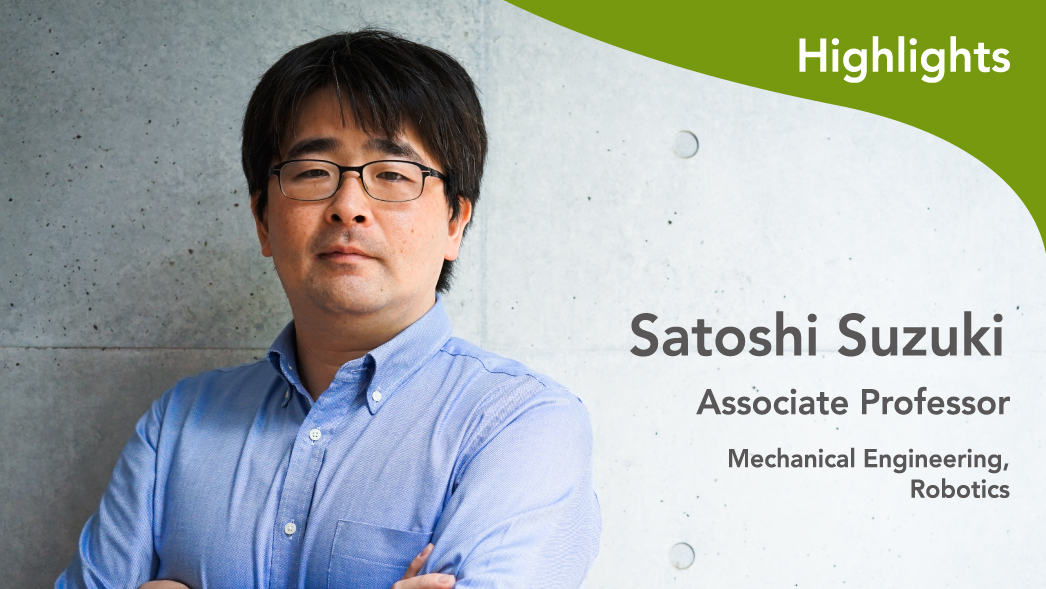 Satoshi Suzuki
Honing Drone’s Agility with Sophisticate Control System
In recent years, drones have rapidly penetrated society, and their use is expanding in various scenes such as aerial photography, agriculture, structural inspection, surveying, and disaster prevention. However, as the scope of drone use expands, its weaknesses are becoming more apparent. For example, there are challenging environments for current drones to fly around and complicated tasks for a single drone to accomplish.

In our laboratory, we are researching from the viewpoint of control engineering and robotics to overcome these weaknesses that hinder the implementation of drones in society.

In our research on “6-Degree-of-Freedom Independently Controllable Non-Plane Drones,” we developed a non-planar drone with six rotors each tilted to achieve exceptional mobility that is not possible with conventional drones. Applying the appropriate control system to this aircraft allows for the independent control of translation and rotation, and also a high level of precision in flight that far surpasses conventional drones. This research is being carried out in collaboration with a company and will be used for inspection of large-scale structures that require precision flight under strong wind turbulence. It is also possible to develop this research to establish a design theory for drones with outstanding agility suitable for individual missions.
Figure 1: A non-planar drone with independent control of translational and rotational motion.
Another example is “Cooperative Flight Control of Small Drones,” which aims to realize a system in which multiple small drones weighing less than 200g cooperate to accomplish a single mission. In recent years, there has been demands to use drones at high altitudes and to inspect narrow areas such as under floors, under ceilings, and inside pipes. Drones used for inspection in narrow places need to be small, but the weight and duration of flight are severely limited, so it is difficult to operate a small drone equipped with all the sensors required for inspection.

Therefore, multiple drones equipped with sensors, including visible light cameras, infrared cameras, and ultrasonic sensors, can fly in a coordinated manner in narrow spaces to achieve efficient inspections. Furthermore, we have succeeded in realizing a flight control system that can avoids collisions, which is a problem in cooperative flight in narrow spaces, by applying “model predictive control,” a type of real-time optimal control.

Through the research mentioned above, we aim to make drones more robust for various environments and missions and further promote drones’ social implementations. Ultimately, we hope that proceeding our research can let drones to bring significant benefits to human society, and at the same time, to protect and help us in times of emergency.
Profile
Satoshi Suzuki
Graduated from Chiba University's Graduate School of Natural Science and Technology in 2008. Ph.D. Assistant Professor at Shinshu University since 2009, Associate Professor there since 2014, and current position since April 2019. He specializes in control engineering and robotics with a focus on small unmanned aerial vehicles.