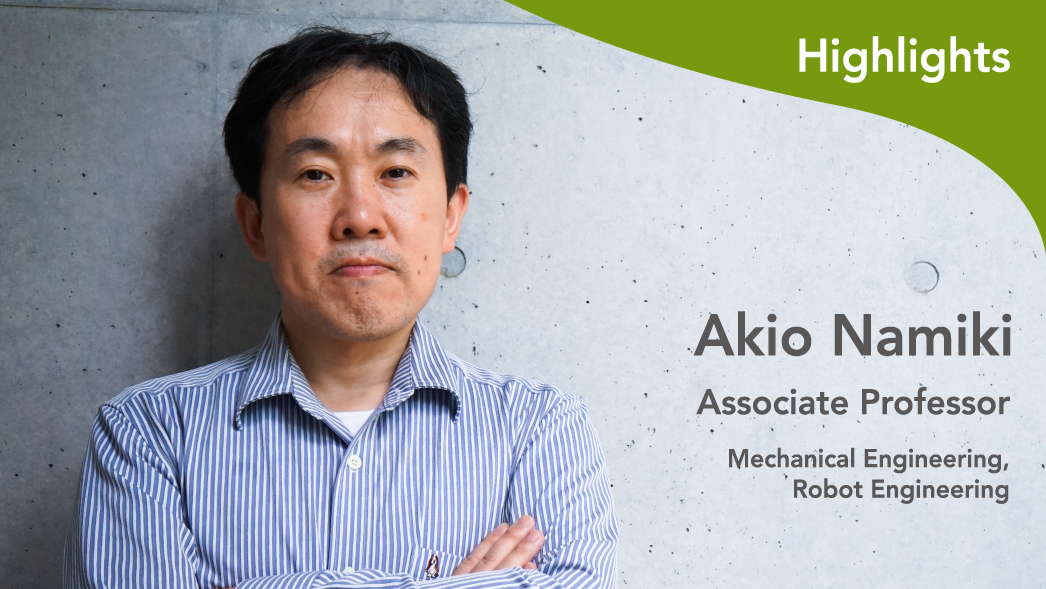 Akio Namiki
Enhancing robots’ vision and their control with high-speed vision
In an industry where robots are in demand, making robots that can respond quickly to visual information still has many challenges. One technology to solve these problems is “high-speed vision.” The high-speed vision is an integrated system that performs image acquisition, processing, and recognition at high speed. Unlike other high-speed cameras for recording, the system outputs the processing results in real-time and online.

By implementing this high-speed vision as a robot’s eyes, we can dramatically improve the robot’s performance. Concretely, the technology allows us to gain the following advantages:

Currently, in our lab, we are applying a high-speed vision to various robots. In the research on “high-speed target tracking,” we developed an algorithm using high-speed monocular vision to estimate the 3D position and orientation of an object. By optimizing the evaluation function based on the target’s contour and texture information in real-time, it estimates the position and orientation of the object. By using this algorithm, we succeeded in tracking fast-moving 3D objects [1].

In the work on “fast visual servos to control drone flight,” to develop a flying robot with bird-like agile autonomous flight, we implemented high-speed vision to a drone. The visual servo is a theoretical framework that combines visual information processing and the aircraft’s control system. It is a keystone of a stable control system. Using a high-speed monocular camera and a parallel processing unit for image processing, we implemented visual feedback control with a rate of 30 Hz. We succeeded in tracking the flight of a moving target [3].
Figure 1：Robots playing ball juggling. They can juggle three balls with stereo high-speed vision and hand arms.
As mentioned above, high-speed vision enables robots to track targets that has been difficult for existing robots. The control of the robot itself is becoming possible with simple systems. We will be developing high-speed visual processing technology for drones and aim to create a next-generation flight control system for a broader range of applications.